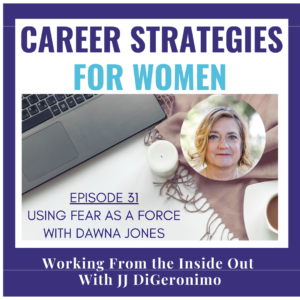 Episode 31: Using Fear As A Force with Dawna Jones

Fear drives a lot of what we do as humans. We often make decisions based on fear, and those don’t always land us in the best of spots. So, how do you use fear as something to propel you to a place of impact and influence? In this week’s episode of Career Strategies for Women that Work, I’m chatting with my friend Dawna Jones about what it means to use fear as a force.

Dawna and I met a few weeks ago through, I would say a serendipitous intersection, and her story was fascinating. I think, as women, we tend to want to have everything figured out; every T has to be crossed and every I dotted before we can jump into anything—but Dawna, turns all that on its head. As a “nomad,” she’s shaped her own way and mapped her own course, and there’s so much we can learn from her!

“The first thing that happens when you have everything that would normally define you, your identity, your sense of security, who you are in the world… when that disappears, you’re left with you and your essence,” Dawna says. “So there’s a beauty in removing the external and discovering, you know, who are you without all of these props. Naturally, the other thing it does is slams you against the wall with all your fears. So you kind of hit that multiple times. And when you do that, you kind of realize, all right, I can use this, this fear.”

Read on for some amazing advice and wisdom from Dawna, and don’t forget to listen to Episode 31: Using Fear as a Force to hear our full conversation!

5 things to remember when using fear as a force

It’s a force and what we do with it is important. Do we use it to reach for higher goals or do we use it to take ourselves out? You have to make a conscious choice, and if you actually decide to use fear as a force, you’re going to be able to handle the unknown, the uncertainty, and the unpredictable with ease.

5:36 – When you can recognize your response to fear, you can control it.

When it comes to negative emotions, like fear or depression, there’s typically a tipping point where you start to spiral down into it—but that doesn’t have to happen. If you can catch yourself spiraling, you can catch yourself and say, “ Let’s not go that way with my heart energy, let’s go somewhere bigger.” It’s a dynamic process of observing what your focus is on at the heart level and recognizing it so you can have control over how you respond.

“We had a hundred dolphins come by the property that I was staying in,” Dawna shared. “And, I mean, there’s nothing more exhilarating than seeing a huge pod of dolphins, just coming down the channel. You’re just sitting there in awe and that’s an unbelievable gift.” It was also a reminder for her to shift her perspective and stop whining and focusing on the lack and instead focus on the richness of what is.

8:59 – When you need to shift perspective, turn to the animals.

It doesn’t matter what life throws at you when you realize it’s all a matter of how you look at it. Think of a mouse when you have to look at the details of something. Or an eagle to see where you’re going and to get a high-altitude view of things.

Sometimes you have to sit back and trust in yourself. Don’t just put trust in the outside world, but trust that you’re capable of handling anything that shows up. You’re strong and you are able to reach above where you are now and go for it. And that doesn’t mean you won’t run into a few walls, but it does mean that when you run into them, you’ll know how to get back up and keep going.

These gems are just the tip of the iceberg when it comes to all the wonderful wisdom Dawna has to share! Her story of how she became a nomad—which includes losing her company during the recession and finding peace by trusting herself—is truly amazing.

Dawna is the embodiment of using fear as a force. She’s stepped into fear, instead of fleeing it, and has used it to propel her into an incredible place.

Stepping into fear and using it as a force in your life can be scary, but I’m rooting for you! Connect with me on Instagram – @JJDigeronimo, and share some of the ways you’ve learned to trust yourself and use fear as a positive motivation in your life.